The actor shot to worldwide superstardom as Christian Grey in the Fifty Shades trilogy, which ended with Fifty Shades Freed last year. Since then, he has moved on to an array of impressive projects; the latest of which – A Private War – stars Rosamund Pike as journalist Marie Colvin. Dornan plays Paul Conroy, who sat beside him on ITV’s This Morning today to discuss the hard-hitting biopic.

Conroy is a photographer who worked alongside Colvin, and the film features real accounts from Syrian refugees who have lost loved ones in unimaginable circumstances.

Dornan told Holly Willoughby and Phillip Schofield: “Nothing can prepare you for that really.

“We knew from the offset that we were going to try and make this as authentic as possible and for a lot of times in the film where we’re depicting, whether it be Syria, Iraq of Afghanistan, we’re using real refugees from those places who have all found themselves in Jordan, where all of the war stuff was in Jordan.

“So there’s a scene where we go to a widow’s basement in the homes in Syria and we’re talking to women of husbands have gone out for the day and not come back.” 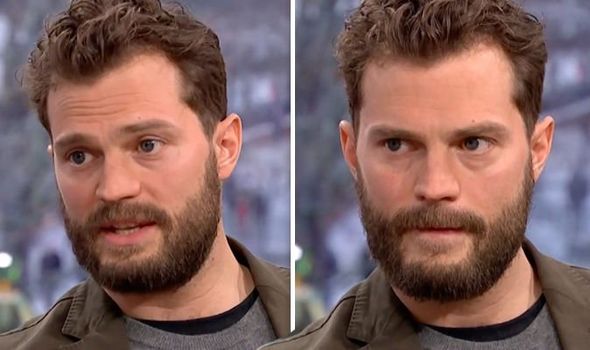 He added: “They were real Syrian refugees who were telling their real stories and none of it was scripted, Ros [Rosamund Pike] and I were just sort of reacting in the moment.

“It was the most cathartic, emotional job I potentially will ever do, I was in bits, particularly by the end.

A Private War has had a strong reaction from critics so far, and saw Pike nominated for Best Actress in a Motion Picture – Drama at the Golden Globes.

The film is finally out in UK cinemas next month after making waves on the festival circuit last year.

It has an 89% score on Rotten Tomatoes, with the consensus reading: “A Private War honors its real-life subject with a sober appraisal of the sacrifices required of journalists on the front lines – and career-best work by Rosamund Pike.”